Every level Yoshis are found in
Yoshi Jr. is a variant of Yoshi, and will only appear after stomping on a Yoshi, Yoshi's in this game behave the exact way a Rex would from Super Mario World.

Yoshi Jr.'s current appearance resembles a Baby Yoshi except their arms are put up and their eyes are closed. Previously their entire body was flattened except for the legs.

Unlike the regular Yoshies, They run faster and can be destroyed with fireballs. 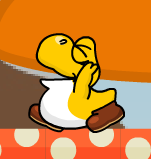 All colors
Community content is available under CC-BY-SA unless otherwise noted.
Advertisement