Most of them starting (Not castle levels)
Yoshi Jr. is a variant of Yoshi, and will only appear after stomping on a Yoshi, Yoshi's in this game behave the exact way a Rex would from Super Mario World.

Unlike the regular Yoshies, They run faster and can be destroyed with fireballs. 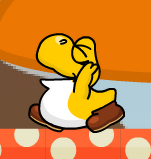 Before v2.5
Community content is available under CC-BY-SA unless otherwise noted.
Advertisement