A Koopa's Revenge Wiki
Register
Don't have an account?
Sign In
Advertisement
in: Article stubs, Characters, Antagonists,
and 2 more

Waluigi is the 3rd Boss in the game A Koopa's Revenge. He Is Wario's Other Brother, as well as the 3rd boss encountered.

Him being the oldest, he tries to one up his brother(due to him using a vehicle as well).

In Battle, Waluigi attacks in a machine, due to him wanting to one up his brother. He is fought inside a snowy mountain with falling glaciers and ice, and at his advantage an avalanche of snow behind him as he digs through with his Dastardly Doom Drill. His machine also functioning with a drill, at the rear of the vehicle it pu

While fighting Waluigi, He will dig through the snow, as glaciers and snow will come at you from both angles. He will shoot evil-looking puff-clouds with his Drill that can damage you but, if equip the Fire Flower, you can easily destroy them and attack Waluigi by spitting out fire, but beware of glaciers and watch out for the snow. Now with the Blue Shell you can easily fly up and jump on him and beware of the dangers, now with a few more hits. Waluigi will turn ice blue and get freeze as he falls out of his machine, defeated.

Waluigi in A Koopa's Revenge.

Baby Waluigi in A Koopa's Revenge.

Baby Waluigi in A Koopa's Revenge 2. 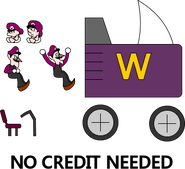 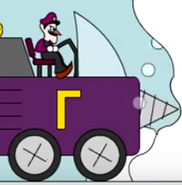