Shy-Guy is a playable character in A Koopa's Revenge II who joins Koopa's adventure alongside Goomba (playable). Shy-Guy appears in the story when Koopa was taking a ride on the airship. He is only playable in the lambta.co and newgrounds version alongside with Goomba

Shy-Guy's color is different than SMB2 Shy-Guy which his clothing is green and his pair of shoe are blue.

Power-Ups on his Appearance 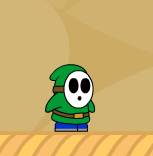 Shy-Guy in the game.