1
Koopa (also known as Koopa-Troopa) is the main and only playable character of the game, A Koopa's Revenge, but later joins forces with Goomba and Shy-Guy in the sequel, A Koopa's Revenge II. His leader is Bowser , which is who he searches for in the first game. Koopa despises Mario and his gang for unexpectedly crashing Goomba's birthday party.

In A Koopa's Revenge[]

Koopa is a yellow turtle that usually wears a green shell although he has some variations. When Koopa uses a power-up, his shell changes color. His shell becomes Orange (AKR2) and Red (AKR1) when equipped with Fire Flower, and when equipped with a Feather, his shell becomes Purple (AKR2) and Blue (AKR1) and grows wings. Without a shell, Koopa becomes a beach koopa which is seen wearing light blue boxers.

Koopa is still the same, although his shell colors are mostly different. Abilities are more in-line with the Mario franchise. For example, Fire Flowers now make Koopa shoot fireballs and Feathers still give him wings, but now acts more like the cape/tanooki from Super Mario Bros. 3 and Super Mario World respectively. An upcoming redesign is known to make the Koopa Troopa looks like from A Koopa's Revenge 1 and make him breathe fire.

Nothing is much known but Koopa will breathe fire again like in the first game. Others will be seen later

Koopa with no shell.

Koopa with a green shell.

Koopa with a red shell.

Koopa with a blue shell. 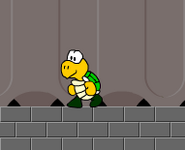