Boorios are Boos with Mario's face and look a lot like Boo Mario, they behave the same way as normal Boos.

Boorios are Boos that resemble Boo Mario from Super Mario Galaxy, they bahave the same way as Boos.

Boorios do not appear in A Koopa's Revenge.

In A Koopa's Revenge 2

Boorios appear in this game, behaving like a Boo. However, they only appear in House of Deception. About halfway through the level, there is a Mega-sized Boorio about the size of a Boohemoth. If Koopa has the ghost powerup, they won't harm the player like other Ghost enemies. 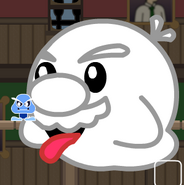 The Boohemoth-sized Boorio halfway through the House of Deception level.
Community content is available under CC-BY-SA unless otherwise noted.
Advertisement